Inspired by the big discoveries of archaeology and through the translations of classical authors, the bourgeoisie  was enthused about the  Greek and Roman ideal of aesthetics.

The enthusiasm for the Greek and Roman experienced a revival and was also shared by Goethe and contemporaries. »Seeking the country of Greece with one's soul«. All Literates who are considered nowadays as German Classics of that time kept coming back to the Greek topics, thinking of Schiller and Wieland. 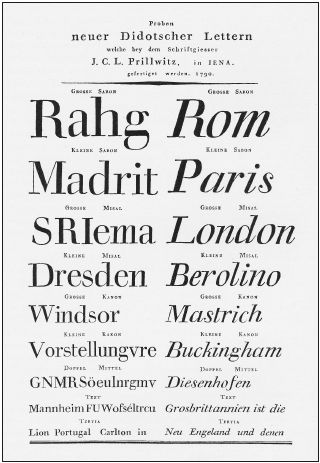 The works of Wieland were published in Leipzig by Göschen. Göschen used typefaces which had been produced by until then unknown punch cutter. This punch cutter from Jena created with these typefaces master works of classicist German typography. They can stand without any exaggeration on the same level as that of Didot and Bodoni. This unknown gentleman was known as Johann Carl Ludwig Prillwitz.

Prillwitz published his typefaces on 12th April 1790 for the first time. This date is significant because this happened ten years before Walbaum. Prillwitz was an owner of a very successful foundry. When the last of his 7 children died shortly before reaching adulthood his hope of his works was destroyed, Prillwitz lost his will to live. He died six months later. His wife followed him shortly after.

The typeface Prillwitz as a digital font was created in three optical sizes (book, regular and display). The typeface NewsPrint NP was created especially for a printing in small sizes for newspapers and was developed from the display. For the regular – even more for the book – a soft and reader-friendly outline was created through a so-called »Verschmitzung« and optimized in numerous test prints.

The arris character and the common maximal stroke width contrast of the known classicist typefaces (Didot/Bodoni) were edited by the study of the original prints. This was also done in order to reach a very good readability in small type sizes.

This typeface is perfectly suited to scientific and belletristic works. Accordingly it has three styles: Regular, Bold and Italic as Auszeichnung*.

The typeface Prillwitz is a complete new interpretation and continuing development of the conservated originals from 1790. They have been kept in the German Library in Leipzig.
It was always given the priority to keep the strong roughness and at the same time optimizing the readability of this striking font.

The type family has all important characters for an efficient and typographic high quality work.