Archibald Binny (1762-1838) emigrated from Scotland, Edinburgh, to Philadelphia, USA, in 1795. Binny was a printer and had gained some experience in punch cutting in Edinburgh. Binny founded in 1796 a type foundry along with James Ronaldson (1769-1841) - a baker who had lost his bakery in a fire.

Under the name "Binny & Ronaldson" they opened the first successful American type foundry in 1896. In 1806 Binny & Ronaldson bought tools and equipment from William Duane, which Benjamin Franklin acquired 20 years before from Pierre Simon Fournier in France.

In 1812 the foundry published a first type specimen book; the first, which was ever produced in the United States. Archibald Binny worked also as an inventor and improver of printing technology, for example a smoothing machine for printing paper. He retired in 1815 from the business and sold his share of the foundry to his partner James Ronaldson. Ronaldson ran the business until 1823. After his retirement he handed the foundry on to his brother Richard Ronaldson. In 1833, the foundry was acquired by Lawrence Johnson and George F. Smith.

The foundry has then been combined with Johnson`s existing foundry and largely expanded and improved. Johnson and Smith operated the foundry for the next 10 years until 1843. After the departure of Smith in 1845, Johnson took his three junior partners into the business: Thomas MacKellar, John F. Smith and Richard Smith. In 1897 the former Johnson Type Foundry was renamed: MacKellar, Smiths & Jordon; with Peter A. Jordon as a partner.

In 1901 MacKellar, Smiths & Jordan Co. merged into the organization »American Type Founders« (ATF); a coalition of 23 different American font supplier. ATF controlled approximately 85% of total production of metal type in the US and was therefore for several decades the largest font provider globally. 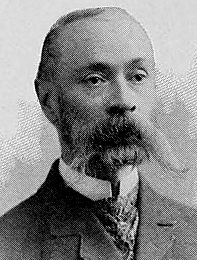 With more than 80 fonts in more than 300 different sizes in his portfolio, Hermann Ihlenburg was the most productive, most underestimated and rarely approved type designers of all time.

Born in 1843 in Berlin, Ihlenburg showed very early in his childhood interest in drawing and engraving. At about fourteen years, he was apprenticed to the Trowitzsch & Son foundry in Berlin. After the end of his apprenticeship he went to Dresden. Later he went to Prague as an copperplate engraver, where he started working for G. Haase foundry. A year later he worked temporarily for three different foundries: Flinsch in Frankfurt am Main, Battenburg Foundry (later Gustav Majeur) in Paris and the foundry Basler in Berlin.

In 1866 Ihlenburg emigrated to Philadelphia to work for the L. Johnson & Co. Foundry (later MacKellar, Smiths & Jordan Co.) for more than 30 years. There he designed vignettes and ornamental trim pieces, and later, of course, its own font designs for which he was famous in his time. He designed, inter alia, more than 30 ornamental borders and fonts for its clients and cut throughout his career more than 32,000 stamps in steel.

Through its growing preference for floristry (which quite corresponded to the prevailing taste), he integrated into his designs more and more floral swinging flourishes and turns. Therefore, one can quite consider Hermann Ihlenburg, alongside William H. Bradley, as one of the pioneers and most important representatives of the typeface design of the Jugendstil (Art Deco also in England; Art Nouveau in France) in America.

In addition, in the area of art and craftsmanship became Louis Comfort Tiffany, who was famous for his unique, patented glass technology, known far beyond the borders of America.

Even the architect Frank Lloyd Wright needs to be mentioned, whose early works are strongly influenced by the Japanese. All four designers are so style-defining for this artistic era in the United States. After the takeover of Mackellar, Smiths & Jordan Co., Hermann Ihlenburg continued to work for American Type Foundry in Philadelphia and designed until his death 11 more fonts.

All these artists became famous and were known far beyond the borders of the United States - except Hermann Ihlenburg who has already been forgotten by the public soon after his death 31st July 1905, in Philadelphia.

The following fonts by Hermann Ihlenburg are available from PreussType: